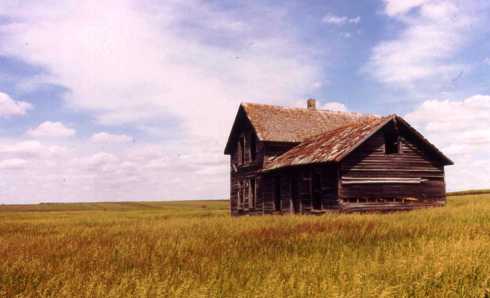 “The true basis for any serious study of the art of architecture still lies in those indigenous, more humble buildings everywhere that are to architecture what folklore is to literature and folk song to music.”

Drive down any road in South Dakota, or practically any road in the Midwest for that matter, and you will see abandoned buildings. You might come across an old house sitting in the middle of a pasture with cows grazing around it. Or it might be a barn that seems like it sprung up by itself in the middle of a soybean field. It could even be a lone abandoned silo keeping watch over a cornfield. Ever wonder about those old buildings? Who inhabited them at one time? Why are they abandoned? That was the inspiration for Skeletons of the Prairie: Abandoned Rural Codington County, South Dakota.

The book, released by the Historical Society in 2000, began as a project by the Codington County Historic Preservation Commission to document and catalog, through photography, all the abandoned houses, barns, and other structures in Codington County, South Dakota, before they are all gone. Once the Historic Preservation Commission finished their work, taking photographs of more than 100 different buildings amounting to more than 1,000 photographs, Codington County Historical Society Director Tim Hoheisel thought a book would be a natural next step.

“Our mission at the Codington County Historical Society is to preserve, interpret, and disseminate the heritage of Codington County. The photographs preserve the buildings, the text interprets the history, and publishing a book disseminates the information to everybody. A project as important as this just had to be accessible to as many people as possible,” Hoheisel said. “The book is important to our local history because it documents something that will be gone in a few years; something that we will never see again.” The hardcover book is 160 pages long and contains more than 200 full color photographs. 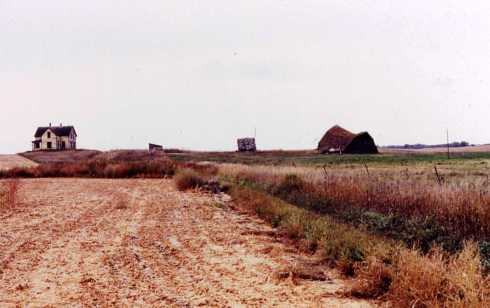 Professional photographer S. Paul Tuszynski took all of the photographs. His photographs capture the light and shadow of each barn, house, silo, or other abandoned structure, to create a specific emotion for each picture. The beautiful and artistic photos are the focal point of the book. Watertown writer Ried Holien then wrote text to accompany the photos and really brought the buildings back to life. Part history, part poetry, part literature, and part art are what make the text so delightful to read. Ried’s words put flesh onto the skeleton frames of the abandoned buildings that Paul photographed. The book also has a wonderfully written forward by South Dakota State University English professor emeritus and poet laureate of South Dakota David Allan Evans.

You may ask yourself, like many people will when they see this book, why is it important to preserve these beautiful old, abandoned, nearly fallen down buildings? It is important because they are a tangible link to our past. South Dakota only became a state in 1889, but that does not mean that we have no history. South Dakota has historic relics comparable to Europe. They may not be 1,000-year-old castle ruins or cathedrals decorating the landscape like in Germany, France, or England, but what we do have are no less important. These abandoned buildings tell the tale of early pioneer settlement into Dakota Territory and later South Dakota. It is true that the reasons why these buildings are abandoned are not always pleasant. Many of the farmers or settlers were forced out of their homes because of droughts and depressions. Similarly, even the most beautiful and historic castles in Europe do not have happy stories within their walls.

Whether we want to remember it or not, the history of these abandoned buildings remains a part of our history. That history needs to be preserved and the stories need to be told. All of the abandoned buildings, schools, churches, and other relics tell a story; a story of who we were, where we came from, what we have done, and where we are going. The people who built and used these buildings may not have been from this country, but they sure helped build it. The people who grew up living in these now abandoned buildings are mostly gone. Just like the buildings themselves, fewer and fewer of each survive to see another year. Too many young people today, to their own disadvantage, do not know the history of these great buildings. They may not appear like much, but to the people who built them and lived in them, they were castles. They remain today as our prairie castles, standing proud among the corn and bean fields, watching over herds of cattle, telling us that we too were once small and poor. They tell us to remember where we came from, so we can remember where we are going. Bill Holm writes in Landscape of Ghosts very accurately:

There is a kind of essential truth in those old weathered boards, their condition of spiritual and actual paintlessness, their color stripped away by age, history, economics, nature. They show us part of ourselves not visible next to the new windowless, sheet-metal prefab life of the moment, a part not always cheerful and comfortable to think about. Sometimes they show us unexpected joy. Poets, like photographers, pass by the new subdivision without a single metaphorical quivering of their pencils, but an old board that has been battered and beautified by its history has probably got something valuable for human beings lying under it.

Perhaps it is impossible for this or any book to preserve the entire history of even one abandoned building. Still, this book tries to preserve what it can, even if it is just skeletons and memories. Every year, more of these buildings succumb to the elements and old age. All the pictures in this book were taken in a ten-month period between 1998 and 1999 in Codington County, South Dakota. During that time, more than ten buildings fell down or were destroyed. More will follow in years to come. Hopefully this book saves what little it can from each building, if only a picture to accompany an obituary.

Tim will be presenting ‘Skeletons of the Prairie’ at White Night 2o11, June 17th at 6pm, in the historic Welk Opera House on the grounds of Prairie Village. This event is sponsored by the South Dakota Humanities Council and the National Endowment for the Humanities, and is free and open to the public.